The companions of Wilderswood Chapter No 5932, along with their many guests, gathered at Horwich Masonic Hall to witness the installation ceremony of Martin Brownlow as first principal, Peter Schofield as second principal and Daniel Healy as third principal. 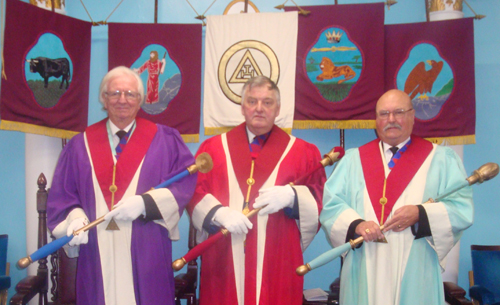 With the initial business completed, Paul Hesketh announced that Chris Butterfield stood without and demanded admission. Chris was processed into the temple accompanied by an officer of supreme grand chapter Geoff Porter and acting Provincial grand officer Russell Green.

Chris was warmly welcomed by the three principals and the installation ceremony started. The companions of the chapter and visitors were able to witness a most enjoyable ceremony.

The robe address to the first principal was delivered by Ralph Vincent. Stan Wood and John Dawber delivered the second and third respectively.

At the completion of the ceremony Chris was presented with a cheque for £300 to the MCF 2021 Festival and he thanked the companions of the chapter for their kind and generous donation.

Following the convocation, the members and their guests retired to enjoy a delightful festive board in the beautiful surrounding of Ridgmont House and the companions were treated to a superb rendition of the three principal’s song by Zack Thornley.

The three principals with grand and Provincial grand officers