Once every year, all Masonic lodges appoint a new master and a new team for the coming year. For Astley and Ellesmere Lodge No 730 their new Masonic year starts at the beginning of the year in January and this year it is also the start of a new decade. 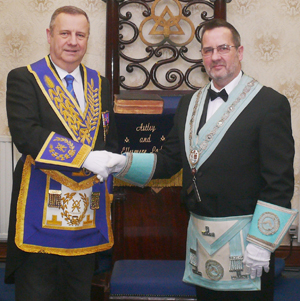 Astley and Ellesmere Lodge was formed in 2009 by merging of two lodges, Astley Lodge and Ellesmere Lodge and is the oldest lodge within the Chorley district, with Ellesmere Lodge having been founded in 1858, over 60 years ago! It is sobering to realise that with all this newness, the members of the lodge have been installing their new master for over 160 years. A tradition to be proud of.

Before this year’s installation, the outgoing WM Rob Winn said that he had thoroughly enjoyed his year as master of the lodge and had made many new Masonic friends whilst visiting other lodges at several installations within the Chorley Group. He added that social events had been different this year, instead of a ladies evening, the lodge had run a social evening and there had been a joint Christmas party with Townley Parker Lodge, which had been a great success and very enjoyable.

During his year Rob had not neglected the charitable side of the work of the lodge. At a meeting of all lodge members it was decided who were to be the charity recipients during his year. The charities chosen came from suggestions from brethren who had had personal involvements and dealings with them. Local charities were encouraged due to the direct benefit on the immediate community. As a result, at the installation, the lodge presented cheques of £500 to the MCF 2021 Festival, £200 to the St Laurence’s Open Table Project, £150 to Derian House, £150 to St Catherine’s Hospice and £600 to the Masonic Hall Building Fund, £120 of which coming from the lodge Christmas card scheme, whereby every member was invited to pay £5 for their name to be included on a lodge Christmas card and distributed to members and widows. This, when added up, came to the magnificent total of £1,600 for Masonic and non-Masonic charities.

The new master was Mark Briggs, a local lad who went to St Michael’s High School, under the watchful eye of a very eminent Mason Tom Jackson (tough Tom as his pupils knew him). Mark said that he had joined the British Army as an electronics apprentice at 16 and left 24 years later as an Artificer Sergeant Major, Warrant Officer Class 1. Mark went on to say that he was currently employed repairing, maintaining and validating endoscope equipment throughout the UK, causing him to take frequent trips away from home. In his spare time, he enjoys the odd game of golf and taking his son to watch Chorley FC whenever possible. 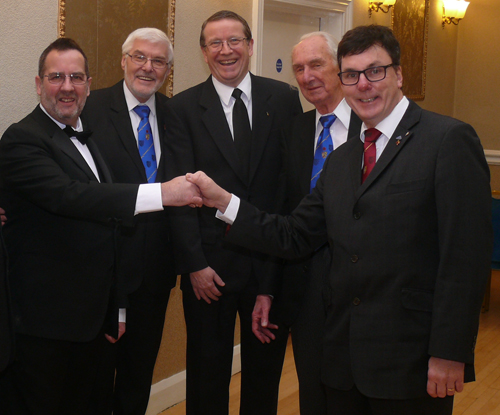 Mark Briggs (left) congratulated by the reigning masters in office.

It was Mark’s first time as master, and he certainly had an installation to remember. Chairman of the Chorley and District Group of Lodges Peter Lockett is a regular attendee at installations in the group, but on this occasion, he had an additional role to play as he represented the Provincial Grand Master. He commented later on the quality of the work done by the whole installation team and made special mention of the members who had presented the working tools; John Lancaster for the tools of an installed master, Kevin Turner for the third degree tools, Ian Smith for the second degree tools and Andrew Cogle for the first degree tools. Andy McMath delivered the address to the master admirably and likewise John Rhodes the address to the wardens. Peter was too modest to comment on his own delivery of the address to the brethren of the lodge.

Following the lodge ceremony, Mark then presided at the festive board where all the members and guests enjoyed good food and more especially each other’s company. After the meal, which was of the usual high standard of the Chorley Masonic Hall caterers, the usual toasts and speeches were made. It is a tradition at most installations, as well as toasting the health of the new master with wine he is toasted in song. On this occasion the song was delivered by Bryan Flynn, accompanied by Mike Seegar and during the choruses by the voices of the members and guests. Charity was not forgotten at the festive board as the raffle raised a wonderful total of £160. One of Mark’s final duties of the evening was to present Peter with a bouquet of flowers to take home to his wife.

A new Masonic year for Astley and Ellesmere Lodge was ushered in fine style. As the evening drew to an end, the members and guests agreed that it had been a wonderful evening and that the masters that had gone before in this old lodge would have been very proud.