Every masonic event can be seen differently depending on whose eyes are being used. As an experiment, a number of people who went to the recent installation of Robert (Bob) Smith at Blainscough Lodge No 8532 were asked what were their memories and what stood out most. 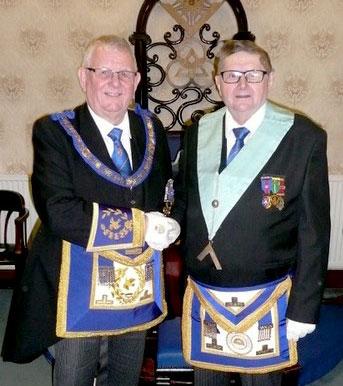 Bryan Hoarty, the lodge secretary, said that the it was a very relaxed and enjoyable evening. Once all the lodge business was dispensed with, Allan Farrington, the installing master, welcomed Assistant Provincial Grand Master Stewart Seddon and offered him the gavel. There followed a humorous exchange between them which set the tone for the whole evening; which proved to be a relaxed, humorous and sincere ceremony. At the end of the ceremony several visitors commented that they had enjoyed the good humour in which it had been conducted. This theme was continued in Stewart Seddon’s address in the lodge when he congratulated the participants in the ceremony and during which he commented upon the fact that this was the sixth time the incoming master, Bob Smith, had been installed.

The festive board was also an enjoyable affair with the brethren chatting animatedly and indulging in friendly badinage which was given and taken in good humour. Before Stewart retired, the new master presented him with a beautiful floral display for his wife. Stewart’s witty but sincere response captured the theme of the whole evening which thankfully was enjoyed by all. The toast to the visitors proposed by Paul Wilkinson was short and to the point. The response was given by the master of St James Lodge No 8910 Dennis Broomhead, who gave a short witty speech accompanied by a cooperesque magic trick. Who said the characters are disappearing! Bryan said that this was a quick recollection of his impressions. If he had known he was to do this he would have taken notes of precise incidents to illustrate the points!

The group secretary Don Hesketh said that Blainscough installation in the company of an Assistant Provincial Grand Master and group vice chairman was a very enjoyable evening. Allan Farrington thanked the lodge for the honour of being its master for the last 12 months despite being a relatively ‘new boy’. The new master Bob Smith is now by his own admission multiple times re-cycled but never the less is looking forward to the ensuing year in office. The acting Provincial director of ceremonies brought the new master, Assistant Provincial Grand Master and group vice chairman into the festive board but made the school boy error of turning right straight away up the junior warden’s table whilst his procession carried on to the senior warden’s before turning! Much to everyone’s amusement. Notwithstanding that he ran a very good festive board. 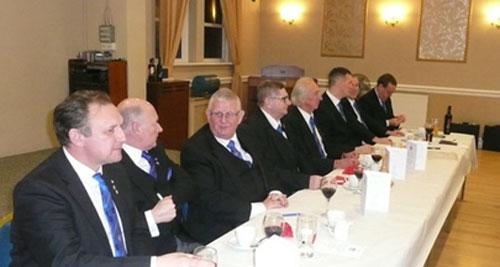 Allan Shields, a Provincial Grand Steward, said that it was a most enjoyable evening all round. The installation ceremony was very good with a mix of both very experienced hands in the shape of the installing master but good contribution from newer guys. The festive board started with the director of ceremonies going one way and Assistant Provincial Grand Master Stewart Seddon the other when they processed in! Which got a round of applause and a cheer! Good fellowship and an excellent meal were enjoyed by all. Chris Jones, stood in at the last moment to do the masters song. The new master infused enthusiasm for the year ahead in his response.

Allan Farrington, the installing master, remembered the evening and said that Bob Smith, the new master was last in the chair of Blainscough Lodge 16 years ago in 2004 and has also been the master of St James Lodge. At the festive board, Allan Farrington, the new immediate past master, passed on to the new master Bob a watch so he had no excuse for ever being late and a tankard, bought by the founders of the lodge to remember them by. The tankard was, it is believe, was bought by the founders so that the members of the lodge could all in turn drink to their health, Allan not been in the lodge long enough to know how this worked but since he has been a member the tankard has not been used like that. The watch is a Masonic wrist watch with Masonic symbols on its face. It is believed to have been bought by Malcolm Schofield and presented to the lodge and is now passed on with the tankard.

Steve Corner, the lodge charity steward. said that as part of the installation, the lodge announced that during 2019, donations of £2,803 had been made to charity. This was made up of £500 to the Masonic Charitable Foundation 2021 Festival, £100 to the Chorley Masonic Hall Association, £128 to Vine House Preston, £100 to Help for Heroes, £100 to St Catherine’s Hospice, £100 to Derian House, £100 to Rosemere Cancer Unit at Royal Preston. In addition, £220 was donated to the Guide Dogs for the Blind from the gunslinging night organised by Allan Farrington and £800, the result of bar sweet sales organised by Malcolm Schofield, was donated to the Masonic Trout and Salmon Fishing Charity. Chorley Masonic Hall Association £300, Care of Police Survivors £100 and RNLI £50. All these, when added to the personal donations to the Masonic Charitable Foundation 2021 Festival of £205, give a total of £2803.