The many brethren and guests of Rockhaven and Horwich Lodge No 2324 were honoured by the presence of Assistant Provincial Grand Master Stewart Seddon at their regular lodge meeting. 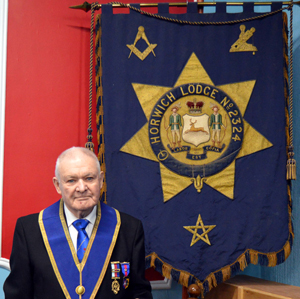 Bob Baxendale next to the 100 year old Horwich Lodge Banner.

This evening however was not just any regular lodge meeting as it was the long-awaited celebration of 50 years in Freemasonry of Bob Baxendale, one of the most experienced and well-respected member of the Craft in the Chorley Group.

The lodge was opened and the general business dealt with in the usual manner by the WM Colin Fisher, before Stewart entered the lodge and immediately took the chair in order to presided over the celebrations and tributes which were to follow.

Stewart then invited Bob to take centre stage before going on to give a most heartfelt and enlightening account of Bob’s life and Masonic career.

He started by saying that he had spent a wonderful time at Bob’s home talking with Bob and his wife Margaret where he learned so much about, as he put it, ‘Bob the man, husband, father, and grandfather’, as well as ‘Bob the Freemason’.

Bob was born in Horwich in January 1933, a good year, for many well-known and respected personalities from the world of sport, politics and entertainment were born in the same year, including the great and well-known actor Sir Michael Caine, but ‘not a lot of people know that’.

In his early life, Bob lived with his mother, father, brother and sister and as a boy attended St Catherine’s Primary School. Then it was off to Horwich Secondary Modern school where, after 12 months he passed to go to Horwich Junior Technical School.

Leaving school at 15 years of age, he got an apprenticeship at Horwich Locomotive Works to become an engineer.  This meant three nights a week at Horwich College Mechanics Institute. In 1953 he left the Locomotive Works to join the Merchant Navy, working for a company called Elder Dempster Lines, where he finished his apprenticeship and thus qualified and achieved his goal of becoming an engineer, whilst seeing a lot of the world in the process. 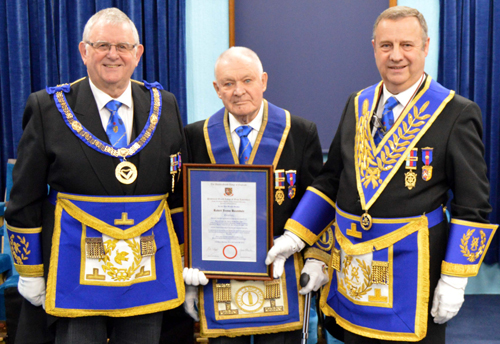 Bob left Elder Dempster in 1960 and joined De Havilland at Lostock on rocket assembly and air to air missiles, before moving on to heavy engineering at Hick and Hargreaves of Bolton.

A change of direction followed when he took a job as a draughtsman with Ames Crosta Mills, who were design engineers based at Heywood, to be followed by transferring to Gullit Dobson where he was designing roof supports for the mining industry and where he ended up as chief draughtsman before being made redundant at the age of 55.

Undeterred, he found a position at Protector Technologies at Skelmersdale as a project engineer designing safety equipment for industry. He ended up as factory manager until his eventual retirement when he was 65.

In 1950, whilst attending a Mechanics Institute dance, Bob asked a young lady called Margaret to dance and from then on they started going out and their relationship blossomed. However, as their relationship grew stronger, Bob did the only thing any sane man would do, he joined the Merchant Navy and went off to sea. Their courtship was conducted via air mail and the brief times Bob spent at home on leave. In July 1958 Bob and Margaret were married

Bob and Margaret have a daughter, son in law and a grandson, all of whom are very close.

And so on to Bob’s highly impressive Masonic career, Bob was proposed and seconded in Horwich Lodge in October 1969 and was initiated in December 1969.

Passing and raising quickly followed in March and September and the following year Bob was on the ladder. Going through all the offices in the lodge, Bob was installed as WM in November 1982. Since that time, he has fulfilled many offices including that of treasurer. 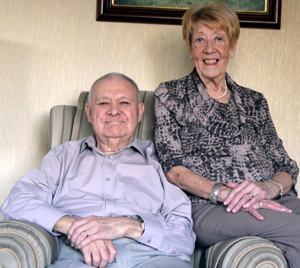 Throughout his 50 years, Bob and his wife Margaret has been very active in the social life of the lodge and have taken part in many of the events that the members have staged, including the ‘Potty Panto’, ‘Lancashire Nights’ New Year’s Eve parties and many more.

Bob has also been and still is, involved in the running of the Masonic hall turning his hand to everything from working on the bar to being a car park attendant. He is the longest serving member of the hall management committee and board of directors. He has been the Masonic hall treasurer for at least the past 19 years.

Stewart concluded this celebration by saying ” Bob, there is no doubt at all that your entire life has also been an example of what makes a good Freemason, as well as a good citizen, a good husband, a good parent, and, in every way, a contributor to society as a whole. There is also no doubt, that, during the last 50 years, anyone who happened to learn that you are a Freemason, could not fail to see you as anything other than a good ambassador for our order.

After the lodge was closed the brethren retired to the festive board which was a very relaxed and friendly affair in the wonderful surroundings of Ridgemont House, with all present enjoying fine food, wine and fellowship.

The toast to Bob’s health was given by Frank Wilkinson who said: “It is an immense pleasure to propose this toast to Bob who has been my good friend over many years and has been both an inspiration and a shining example of what Freemasonry is about.” Bob suitably replied.

The last pleasant duty of the evening was to present Bob with a gift from the lodge as a memento of his 50 years in Freemasonry, a pair of engraved wine glasses marking this very special occasion.

In closing the evenings proceedings, the WM presented Stewart with flowers to take home to his wife and also to Bob for his wife Margaret, for allowing him to come out and play for the last 50 years.