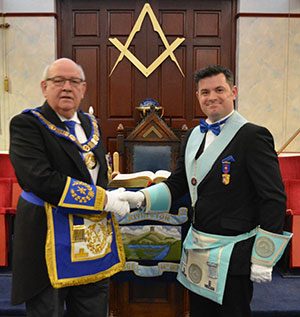 What followed was an excellent ceremony performed by the outgoing master Keith Bennett, who was invested as immediate past master. Graeme was initiated into Verulam Lodge No 6131, at St Albans, in the Province of Hertfordshire on 15 January 2011, passed 21 May 2011 and raised 21 April 2012. He then joined Rivington Lodge in January 2014, taking offices in both lodges. He was then installed as master of his mother lodge on 21 October 2017, whilst being junior warden of Rivington Lodge. Graeme has occupied every office in both lodges and performed well in both. He installed his successor of Verulam Lodge in October 2018 and then within six months took the chair in Rivington Lodge, showing he is a worthy Mason indeed.

Graeme was honoured to have on the acting Provincial team, Rivington Lodge’s very own almoner David Parker who was given the acting rank of Provincial Junior Grand Deacon just 5 days earlier, and this was his first official outing in his new rank.

The working tools explanations were presented in a delightful manner, the third was given by Dave Sexton, the second by Lee Derbyshire and the first by Mike Harrison.

So, Graeme is the master of a lodge for the second time in five months, and the brethren of Rivington Lodge are sure that he will do another fantastic job, as he has two second degrees and two thirds to manage in this ensuring year.