It is tradition for St George’s Lodge of Chorley No 7161 to hold their installation meeting on St George’s Day and this year was no exception. 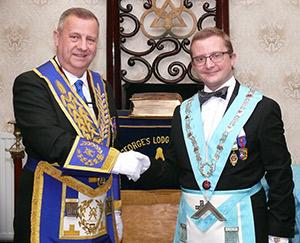 The lodge room was full to witness the installation of John Askew by installing master Paul Greenway. The representative was to have been Paul Hesketh, but unfortunately due to ill health, he had to send his apologies. Every cloud has a silver lining as this gave Peter Lockett, Chairman of Chorley and District Group. an opportunity to act as the representative of the Provincial Grand Master tony Harrison in his own lodge.

The lodge was amply supported by visitors from Cheshire, Nottinghamshire and even East Lancashire as well as local lodges in the Chorley Group

Paul Greenway took the chair as WM and quickly despatched the business of the lodge so that Peter Lockett, accompanied by grand officers Thomas Jackson, Joseph Hall and Dennis Onslow, as well as acting Provincial grand officer Steven Lowe processed into the lodge and took their seats to witness an excellent ceremony.

John really must like being WM as this was his second installation, the first time was in St Helens Lodge of Loyalty 897 for 2017/2018. He installed his successor in November and 6 months later he was installed as St George’s Lodge of Chorley WM.

The ceremony started with John Askew being presented for installation by his proposer into St George’s Lodge of Chorley, Iain Wilson. Paul Greenway then presided over a ceremony in which all the team played their parts to a very high standard, bringing to a close a most successful year for Paul and the lodge.

The brethren especially enjoyed the working tools being presented by three ‘light blue’ non past masters. These three, Adam Beswick, Christan Upton and Ray Thain presented the third, second and first degree tools respectively with great confidence and understanding. The high standard of work carried on as Edwin Schofield, Graham Wallis and Peter Lockett gave the addresses to the WM, wardens and brethren of the lodge. A poignant moment for Peter, delivering the address to the brethren of his own lodge, making history by being the first member of the lodge to deliver the address to the brethren.

As soon as Paul announced that the ceremony was complete, John presented Peter with four cheques. The first for £450 to the hall building fund, the second for £500 to the MCF Festival, £250 to Rosemere and £150 to 22 MCR, a charity set up to support the survivors of the Manchester Arena bombing in 2017. This gave a magnificent total of £1,350 to charity which Peter gratefully received and assured everyone that the monies would be faithfully applied.

John then proceeded to appoint and invest his officers and it soon became apparent that we were witnessing something very rare in a lodge – each officer from tyler to senior warden were ‘light blue’ non past masters, and that included the three fellow crafts appointed as stewards. Comments echoed round the lodge room that it was such a pleasure to witness and wished it happened more often.

As John transacted the rest of the business of the lodge it soon became apparent to all that St Georges Lodge of Chorley were in for a good year under his mastership. His conversational style was a pleasure to watch and showed what an accomplished ritualist he is.

The installation ceremony complete, the brethren retired to enjoy good food and good company. The festive board was an upbeat affair with all of the brethren, and especially the visitors, commenting on the liveliness of the atmosphere. The master’s song was ably sung by Brian Flynn accompanied by the excellent Dougie Little.

Much was made of the WM’s height (or lack thereof), which was taken in customary good humour. In replying to the toast to his health the new master paid tribute to the brethren of the lodge who put in such a superb effort to make the night a special one. He particularly praised the outgoing secretary Ray Thain for his work in that office, commenting that he had been driven to hair loss by the pressures of the job!

Before retiring for the evening, the WM was pleased to present Peter Lockett with a bouquet of flowers to ensure a warm welcome from Pam when he got home.